ZOE DEWITT Cis/Trans - Portrait of myself as Countess Zoltowska 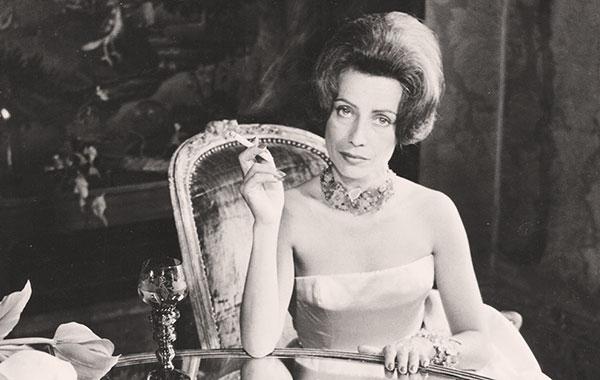 As part of the thesis exhibition at the Academy of Fine Arts Vienna I show my work CIS/TRANS - Portrait of myself as Countess Cis Zoltowska, which sheds some light on the Austrian costume and jewely designer Cissy Zoltowska.

"THE STORY OF this work begins with a love affair that took place in the mid 1960s, when a young ­student of sculpture at the Academy of Fine Arts Vienna met an aristocratic Austrian lady and ­­­became her lover for some years. The art student was my father, and the lady was Countess Cis Zoltowska, a costume and jewelry designer, who had worked in the 1950s and 60s for French haute couture labels and produced own jewelry collections under the name ‚CIS of Paris’ and ‚Countess Zoltowska‘.

Cissy Zoltowska, born as Maria Assunta Frankl-Fonseca in Vienna around the late 1920s, grew up as the ­daughter of an Austrian father and a Hungarian mother in an ­upper class environment at Altmannsdorf Castle, which at that time had been a meeting point for patrons and lovers of the arts. ­During the reign of the Nazis in ­World War II she was forced to flee to Switzerland, where she married an elegant but impoverished Polish Count ­named ­Zoltowski and began to make ceramic ­jewelry. In 1951 Cissy moved to Paris and produced accessories for ­fashion labels such as Pierre ­Balmain, ­Jacques Fath, James Galanos and Balenciaga. Being ­disappointed that the costume jewelry of her times imitated only the real thing, she decided to make her own ‚real’ fantasy jewelry using crackled glass cabochons and Swarovski rhine­stones in fancyful designs and ­exquisite colour ­combinations. In the 1960s Maison Cis had around 40 employees and produced two collections with 400 models each per year. They were distri­buted worldwide from French boutiques to New York department stores and ­frequently appeared on the covers of Vogue, Paris Match and Harper‘s Bazaar. During that time Cissy lived in Paris and ­Vienna, with longer annual stays in Thailand, from where she drew a lot of her inspiration. Preceded by her ­reputation as a creative artist and designer, in 1967 Cis Zoltowska relocated to Los Angeles where she lived in West Hollywood until her death in 2004. Still on the gangway of her plane to L. A. she tried to persuade my father to come with her, who finally ­refused because of his young family and little child – which was me.

I never have met Cis Zoltowska in person, and learned about the affair only in recent years by tales of my father. ­
Later I discovered in the attic of my parents‘ house old newspaper pages and photos of Cissy, as well as a hand ­drawing of her­ showing a conductor in front of his orchestra. I realized that it had been her gilded cabochons and ­metal ­l­­eaves with whom I had played as a child, and that there still were objects in my possession that originally had been a ­present my father was given by her – such as an antique Chinese foo dog which I had kept through­out my life. The more I ­learned about this extraordinary person the more I became ­fascinated by her and felt to be connected with her by a strange ­affinity: her uncompromising extravagancy and self-determined­ness, her love for the arts, for people and for all things of beauty, her collection of Buddha statues and Asian ­antiques, her belief in reincarnation, which she had ­expressed in one of her interviews – all this suggested the image of a ­woman with whom I seemed to have many things in common that never had been part of my parent’s world. Had ­there been an indirect influence from her through the objects I was surrounded by in my childhood? Or was it just an ‚accidental’ case of spiritual kinship (if something like that could ever exist)? In any case she was a tremendous factor in the ­relationship of my parents (as my mother got to know of the ­affair) which has shaped – as an unsolved source of ­conflict between them – also my own unconscious personality and course of life. Whatever the ­mysterious origins and intricate paths of our likeness may be, entering her world is for me like coming closer to the core of my own being: Cis Zoltowska will forever stay deeply embedded in my soul, like a star transmitting a magical light from beyond, ­resplendent as the glittering rhinestones that she understood to arrange so brilliantly in her marvellous ­jewelry ­designs..."