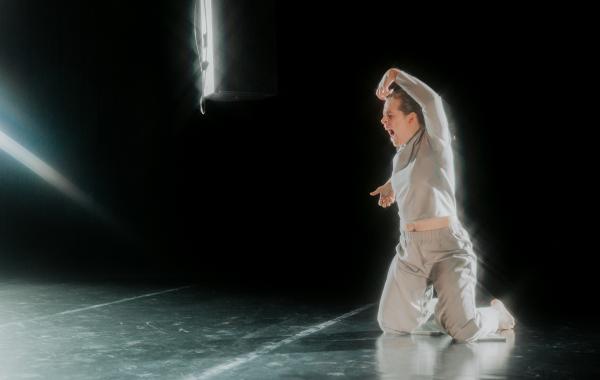 In her solo piece Alalazo, Veza Fernández will shake you to your core by dancing with her screaming voice to a magically electronic soundtrack composed by Rana Farahani (aka Fauna). The performer explores the superior force of the female voice, reaching all the way to its very edges. This creates a both physical and emotional sound experience that involves the audience in its entirety and makes all the dramas, worlds and narratives of screaming bodies palpable for everybody.

“Alalazo” from the Greek ἀλαλά (= to cheer) is the powerful cry of a single voice and a multitude of voices at the same time. Together, they go into battle, crying, cheering, resisting and thus creating a moan of ecstatic joy. Alalazo is the voice that shamelessly forces its way out in order to drown all prejudice and processes that tried to silence it over the course of history. Alalazo is a concert, a cathartic drama, a dance piece, an ecstatic gathering, a landscape that constantly changes. Alalazo combines many forms of expression and offers alternative forms of listening, uniting and relating.

Veza Fernández is a queer-feminist dance, voice and performance artist interested in the political and poetical potential of the eclectically expressive. She likes to explore the sensual and social power of diverse voices and to work with extreme states of body and voice that challenge norms. Veza Fernández studied English and Spanish philology and used to be a high school teacher. She is also a stand-up comedian, singer, poet and party lover. Her solo piece Calamocos or My Grandmother Was a Poet Who Couldn’t Write won the Best OFF Styria audience award in 2014. Her piece When Eye Becomes Mouth premiered as part of the brut programme in 2018.

The Performance on February 12th will be followed by an artist talk.