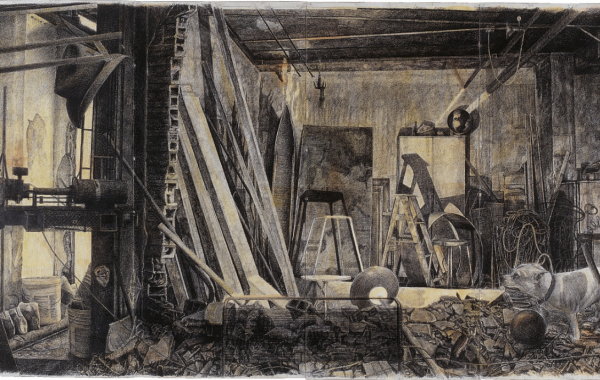 Large-format pencil drawings are the trademark of Peter Hauenschild and Georg Ritter. These two Linz-based artists have been working together closely since 1989, often spending multiple weeks on a single work.

Their drawings are characterized by a realistic pictorial tradition that always provides a pointed view of contemporary events, society, and the environment. Though it may seem as if the a camera’s lens had captured the scene, countless strokes, hatchings, and grids identify these works as drawings—drawings with a special secret. Scenes from everyday life seem to convey a magical aura, with the alternation between the illusion of a photograph and its recognition as a drawn work of art suggesting a mystery around drawing itself.

Markus Muntean and Adi Rosenblum have worked as an artist-duo since 1992 and take frequent inspiration from youth culture aesthetics and lifestyles. Their drawings, paintings, performances, and installations bring together motifs from art history and popular culture.

Muntean/Rosenblum’s works often feature groups of seemingly bored young people hanging out in familiar everyday spaces, public squares, or mysterious landscapes. The models for these figures and their facial expressions and gestures are provided by fashion and lifestyle magazines as well as by works of fine art ranging from the Renaissance to the 19th century. By appropriating and interweaving images from different sources, Muntean and Rosenblum reflect on the power and manipulability of images in today’s ubiquitous media.