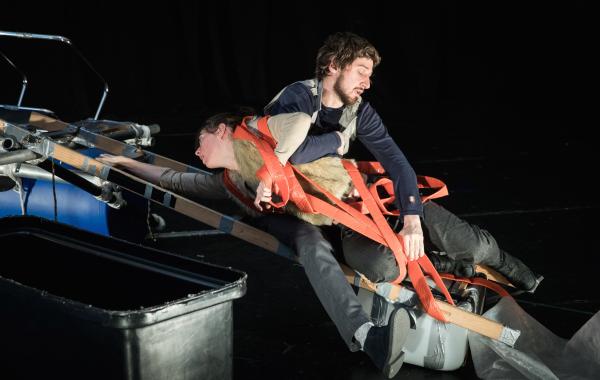 The world has gone off the rails. A group of people are stranded somewhere between the oceans. In her new piece Da-nach [Afterwards], the choreographer Saskia Hölbling has her ensemble DANS.KIAS dance at the border between dystopia and utopia. From 1 to 6 March 2019, her work can be seen for the first time at the former Semperdepot in a composition by Wolfgang Mitterer. Gudrun Lenk-Wane has designed the stage set in which Anna Hein, Ardan Hussain, Jan Jakubal, Leonie Wahl and Oskar Mitterer move.

A group of people find themselves somewhere on one of the world’s oceans between flotsam and remnants of a bygone era. It is unclear what has happened. It would also be irrelevant for the course of events. Now they are there, surrounded by all sorts of things. Do they remember what they were doing before? Rather not. Or do they? From somewhere, suspicions seep through.

In her current work, Saskia Hölbling draws a world on the border between dystopia and utopia. In Da-nach, Hölbling catapults her ensemble out of a world of abundance and permanent networking. Having arrived at this undefined place, it is now in their hands to reinvent themselves. Or not. A dance into the unknown.

A DANS.KIAS production.
Supported by the cultural department of the City of Vienna and the Federal Chancellery of the Republic of Austria for Arts and Culture.