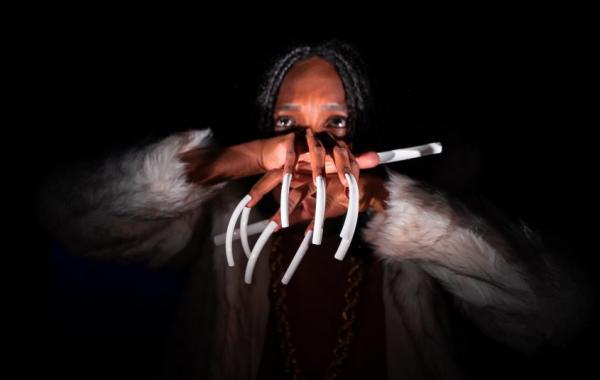 JEZEBEL is a dance performance inspired by the “Video Vixen”: female models who appeared in hip hop video clips in the late ’90s and early noughties. Images in the mass media – and in music videos particularly – often projected the female in a hyper-sensualized way. The repetitive images in hip hop videos reinforce stereotypes associated in particular with black / dark / coloured women. Video Vixens – also referred to as “hip hop honeys” or “video girls” – were the subject of severe criticism and often typified as the “Jezebels” of the late 1990s and early 2000s.

In the pre-Youtube era – when MTV still meant Music Television – the Video Vixen model played a central role in video clips. In spite of the explicit lyrics (usually written by men) and the sensual, seductive and scantily clad appearance of the vixen, her performance had a great influence on the aesthetics of these clips. As well as on the popularity of the (male) artist. During the past twenty years, the Video Vixen has both suffered and benefitted from this. Today, she stands for much more than the objectified “ride or die” model within a male-dominated culture.

JEZEBEL refuses to be defined by others. She navigates the landscape of hip hop culture, looking for ways to reclaim her own image. Can JEZEBEL deconstruct the controversial stereotype associated with the black hip hop honey? How did this video girl redefine herself in 2019?

Cherish Menzo graduated in 2013 from Amsterdam University of the Arts (Urban Contemporary Dance) and has since appeared in work by the likes of Eszter Salamon, Akram Khan, Leo Lerus, Hanzel Nezza, Benjamin Kahn, Olivier Dubois, Lisbeth Gruwez, Jan Martens and Nicole Beutler. In addition to her work as a dancer and performer, Cherish Menzo creates her own pieces. In 2016, she created EFES with Nicole Geertuida: a punishing duet in which perfection and fallibility evoked intriguing questions about how we prefer to see human beings.
Since 2018, Menzo has been dancing the solo Sorry, But I Feel Slightly Disidentified … written by Benjamin Kahn. Menzo went on to make LIVE (Het Veem, 2018): a mix of dance performance and pop/rock concert, in cooperation with musician Müşfik Can Müftüoğlu. JEZEBEL was created in 2019 and received the Amsterdam Fringe Award and the International Bursary Award.