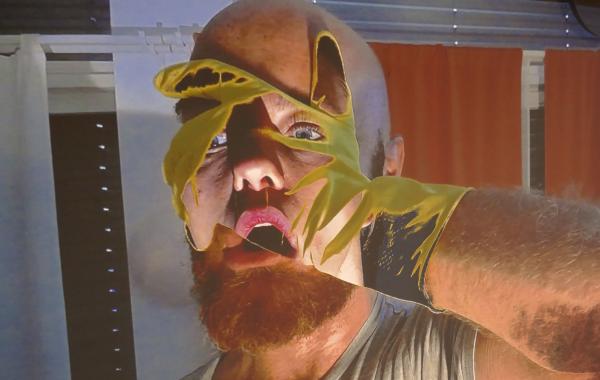 Choreographer Georg Blaschke and video/media artist Jan Machacek take the oeuvre of epic British painter Francis Bacon as the starting point for their latest collaboration, in which the body as a key subject for Bacon’s work underlies their approach.

Bodies and Accidents responds to the oeuvre of Francis Bacon (1909–1992) using devices from performance and video art, reflecting Bacon’s intense, often distorted depictions of bodies and portraits, but also the artist’s method of painting as such by movement, space, sound and installation. Beyond the mere observation of the artworks as it takes places in museums, Bodies and Accidents opens a new perspective on the paintings, which Bacon created as mirrors of human existence – paintings characterised by deformation and imperfection, but also enormous sensual intensity.

Bodies and Accidents marks the second collaboration between brut, the choreographer Georg Blaschke and the video/media artist Jan Machacek. The two artists have laid the groundwork for an original aesthetic approach to the representation of bodies, images and spatial installations with their successful performance I Don’t Remember This Body (2017, 2018). Their new creation Bodies and Accidents will be devised specifically for the world premiere at Atelierhaus der Akademie der bildenden Künste Wien, the studio building of the Academy of Fine Arts Vienna.