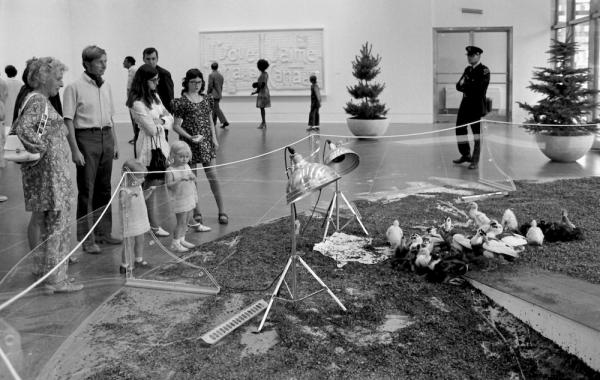 The exhibition „The Mouth is about Language. Joyce Wieland in Close-Up“ at Kunstverein das weisse haus (May 28 – July 6, 2019) focuses on a selection of works from the 1960s and 70s by Canadian artist and filmmaker Joyce Wieland (1930–1998). The films, publications, lithographs and textile pieces on show position Wieland's work with language and the relationship between image and text as a key aspect of her artistic practice, driven by her sense of humour and political activism. Whilst Wieland's avantgarde films of the 1960s increasingly received attention internationally over the past decade, her practice in other media – in particular her large-scale quilts and other textile works – is not widely known outside Canada.

Talks by art historians Johanne Sloan (Montreal) and Tabea Metzel (Berlin) introduce Wieland's practice and the diversity of media that helped shape it. A panel discussion with the speakers as well as film programmer Madeleine Bernstorff (Berlin) explores the connection between Wieland's filmic and artistic practice.

Followed by audience questions
Parts of the event will take place in English.

Biographies of the Participants

Madeleine Bernstorff (Berlin) is a writer and film programmer, whose focus lies on mostly collaborative projects and texts motivated by feminism which examine filmic works of the avant-garde, migration and resistance movements. In her film and video programmes she deals with and contextualises, among other things, the suffragette movement, the video activism of Carole Roussopoulos, the work of artist Margaret Raspé and in September 2019, the artist and filmmaker Ella Bergmann-Michel as well as the subject of political amateur film. She is on the Committee of the International Short Film Festival Oberhausen and gives lectures on film history at universities and academies both in Germany and abroad.

Bettina Brunner (Vienna) is an art historian, curator and art critic working at the interface between curatorial practice and academic research in the field of avant-garde film and contemporary art. She engaged with Wieland’s films as part of her dissertation at the Academy of Fine Arts Vienna (finished in 2017) and curated a film programme on the artist’s work at mumok kino (2017). As part of a curatorial residency at the ISCP, New York in 2018 she conducted further research on Wieland’s work in New York and Toronto.

Tabea Metzel (Berlin) is an art historian conducting research on Joyce Wieland. Most recently she worked as researcher for the project „Evidenz ausstellen”, funded by the DFG, at the art history department of the Freie Universität Berlin. Her texts on Wieland address aspects of repetition, media diversity and representation in the work of the Canadian artist and filmmaker.

Johanne Sloan (Montreal) is a professor and Chair of the Department of Art History at Concordia University, in Montreal, Canada. She has written extensively on Joyce Wieland, in the form of articles and a book on Wieland’s 1976 feature-length film The Far Shore (University of Toronto Press, 2010), while she is also the author of an on-line publication on the artist, at Art Canada Institute (https://www.aci-iac.ca/art-books/joyce-wieland).