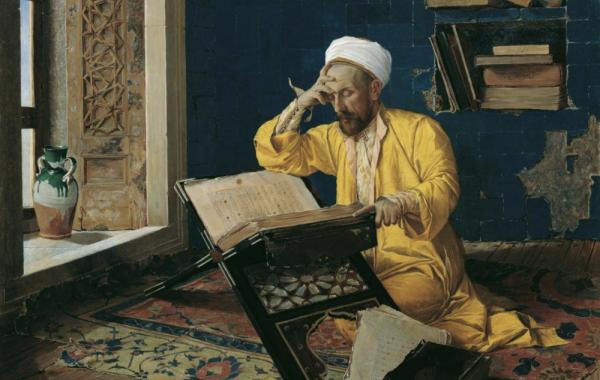 In the 1880s—at the height of European expansionism—three remarkable works were painted that reflect a creative tension between East and West. Acquired by the Belvedere in the twentieth century, they only partly fit the focus of a Eurocentric collection. And yet—or precisely because of this—interest is growing in their creators Hakob Hovnatanyan, Raden Saleh, and Osman Hamdi Bey. The Belvedere is presenting these three works in the series IN-SIGHT.

Hakob Hovnatanjan, The Shah of Persia Nāser ad-Dīn Schāh, around 1860
Photo: Johannes Stoll / Belvedere, Wien
Raden Saleh from Indonesia, Osman Hamdi Bey from Turkey, and Hakob Hovnatanyan, an Armenian artist from modern-day Georgia: three painters, three stories set between European, Near Eastern, and Asian cultures, three pioneers of the painting of their native countries. Osman Hamdi Bey and Hakob Hovnatanyan lived to the east of Europe’s centers. Raden Saleh’s native country Indonesia was colonized by Europeans. Whereas Raden Saleh and Osman Hamdi Bey went to Europe, Hakob Hovnatanyan did the exact opposite - after a career as an European style painter, late in life he embraced the traditions of the Persian School. The Belvedere will be showing one major work by each of these artists. Originally from the imperial collection, for a long time these three works have received little attention. Only in the last twenty years art-historical research, major international exhibitions, and auction results into the millions have forged a new awareness of these artists’ importance.

The exhibition takes a closer look at these extraordinary personalities and sheds light on the background of their works. It places a focus on the distinctive qualities of art that merges European and Asian cultural traditions.

In our globalized age, looking back at the myriad cultural interactions that occurred during the nineteenth century feels more relevant than ever. This will be highlighted in the exhibition, based on the example of the lives and art of these three charismatic world citizens.