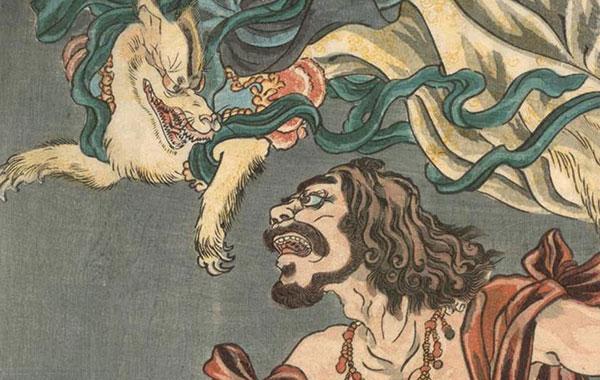 fragment of Utagawa Kuniyoshi, „A Girl: the bad Vixen Kayō and the Indian Prince“ 1855 © MAK/Georg Mayer

Utagawa Kuniyoshi is renowned as one of Japan’s great artists of the nineteenth century. Manga and Anime are practically inconceivable without his visual imagery. He produced artistic and technically ground-breaking prints that were very popular with the general public.

Utagawa Kuniyoshi (1797–1861) could be counted as one of the central figures in the history of Japanese color woodcut prints towards the end of the Edo Period (1603–1868). Together with the leading publishers of his era and with other artists of the Utagawa School, including Utagawa Hiroshige (1797–1858) and Utagawa Kunisada I (1786–1864), he created prints that are artistically and technically ground-breaking and yet very popular among the broad-based public. As a designer of commercial products he was always scouting for fresh impulses and new themes, and a new visual vocabulary. Besides single sheets and series, often produced in close cooperation with the entertainment industry, he interwove into his works cutting and cynical criticism of the upper-class establishment, which endeavored to prevent social change through tougher censorship and restrictions.

The significance given today to the fascinating world of the woodblock print (ukiyo-e) is impressively showcased in the works of Masumi Ishikawa and Megumi Ōishi (UKIYO-E PROJECT) and the graphic designer Andrew Archer. All of them resort to the typical visual elements and techniques of the Japanese woodblock print, nevertheless, the dominant subjects of their works include such contemporary themes as music and sport.
The exhibition UKIYOENOW: Tradition and Experiment shows contemporary approaches to the traditional color woodcut and poses the question of how far the different production forms—traditional handicraft and digital print—are affecting the further development of the ukiyo-e.

At the MAK DAY 2019 all Utagawa Kuniyoshi prints can be bought at the "Print on Demand" stand. Also available online