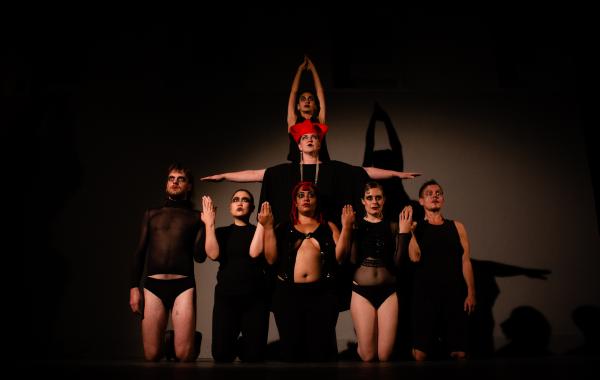 In their revue SODOM VIENNA REVUE, the artists surrounding Denice Bourbon and Gin Müller embark on a search for the personalities, psychological orgasms and utopias of the perverse 1920s Red Vienna era, ‘queering’ them with present times. Come, comrades, and behold in solidarity this glamourous Red Vienna revue, and listen to the maxims of SODOM VIENNA: ‘To be home is to be dead, are my arse is openly red! Heave-ho! Go left with love!’

The historic 1919 election marked the beginning of the Red Vienna era, when aesthetics and politics were progressive, psychoanalytical, lascivious, and saucy all at the same time. Red revues and staged propaganda extravaganzas stood opposite bourgeois scandals like Anita Berber’s Dances of Vice, appearances of Josephine Baker, and Arthur Schnitzler’s La Ronde. The gigantic silent film production Sodom und Gomorrha (1921/22)on the Laaer Berg with more than 15,000 extras combined Bible history with the hedonistic 1920s present. In a colourful show, the players of SODOM VIENNA REVUE bring personalities of the time back to life in keeping with the motto: ‘Vienna, you red Sodom, your colour stands for love and revolution, and Sodom stands for the City of Vice that, full of pleasure, defies all convention!’

Denice Bourbon is a lesbian/queer-feminist performance artist, singer, writer, presenter, curator, and stand-up comedian. She uses humour and entertainment as activist tools to raise awareness of various political issues. She has been working as a freelance artist in both theatre and film for a couple of years, working with fellow artists such as Katrina Daschner, Gin Müller, Veza Fernández, Sabine Marte, Stefanie Sourial, Stefanie Sargnagel, Amina Handke, and Nesterval, and at venues including brut, WUK, WERK X, Ateliertheater, Kosmos Theater, Spektakel, and many more. In addition to co-curating Vienna’s first queer performance festival Straight to Hell (2015) with Denise Kottlett, Denice Bourbon is the co-founder of queer stand-up comedy club PCCC*. In 2018, she was part of the Nesterval cast in their production The Village.

Gin Müller is a dramaturge and ar/ctivist who works in the fields of theatre, performance, and queer studies. He was a guest professor at the Academy of Fine Arts Vienna (2018/19) and is now a lecturer for theatre, film and media studies at Vienna University. In addition, he has realised his own theatre and performance pieces in Vienna (brut Wien) and Mexico City, some of which include: Fantomas Monster (2016/17), TransGenderMoves (2014/15), Melodrom/Rebelodrom – NoborderZone (2012/13), the que_ring drama project (2018/19). Gin Müller was also a co-founder of noborder VolxTheaterKarawane (2001–2004) and the band SV Damenkraft (2003–2008). He was active in the Vienna refugee protests of 2012/13 and has been a member of Queer Base, the LGBTIQ Welcome and Support Project of Türkis Rosa Lila Villa.