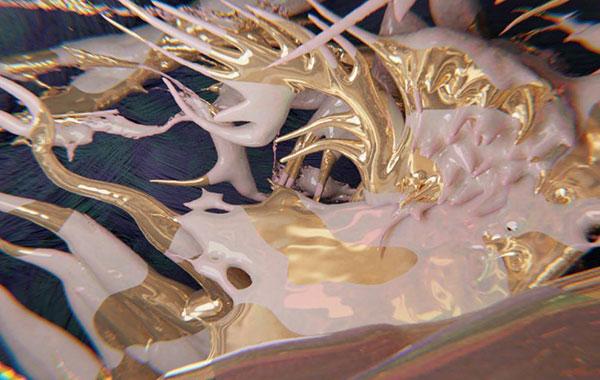 Enrico Zago "..and When I Woke Up My Eyes Were Dazzles and My Ears Were Screeches in the Noontide #3" (2018)

“Crumbling concrete, steel, and broken windows. The door of the one- room apartment on the top floor of the building is open. Inside, a man is sitting on an office armchair wearing an HMD, unaware of physical space, lost in some cybernetic wormhole. The room is barely furnished. Just the contraptions that permit the fantasy are allowed. Inside of that a 4 seconds memory is running endlessly, a glimpse of a warm, sincere and harmless moment, luckily recorded years back and now the only possible world.”

"..and When I Woke Up My Eyes Were Dazzles and My Ears Were Screeches in the Noontide" is a 360˚ video installation that explores a dystopian dimension where technologies are exponentially and steadily colonising the day-to-day life. In a world where the human being changes its own social role from civil/denizen to consumer/user, new blurred borders are appearing. The populist call of duty is changed in terms of appearance, focusing more on a hypernormalization of the individual, pushing for a super-awareness built with uncountable clusters of data; all this useful data are collected and stored in devices defined by their programmed evolutionary path and systemic planned obsolescence. As migration is the last beach of hope, new escapist strategies are emerging in this reality: devices allow to run (or better... look) away from the mass taming in order to experience an intimate and personal space.

-
Enrico Zago (Italy, 1986) is an artist based in Vienna.
His research is focused on new media and illustrations, and his works are mainly prints, animations and immersive installations. In the last years he is creating works that involve 2d and 3d design in order to investigate the perception of the real physical environment into its digital representations and deformations in speculative scenarios.
With a degree in Visual and Performing Arts at the IUAV University of Venice (2010) and a degree at The New Normal Multidisciplinary Postgraduate Research Programme at Strelka Institute for Media, Architecture and Design in Moscow (2017), Enrico Zago currently attends the Digital Art department at the University of Applied Arts in Vienna.