Vienna - the Pearl of the Reich. Exhibition at Architekturzentrum Wien
June 7, 2015 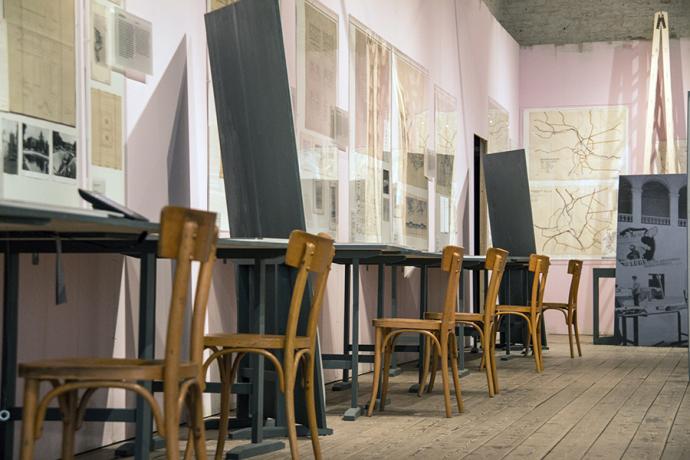 »Vienna. The Pearl of the Reich« Planning for Hitler - Exhibition view

“... in my eyes this city is a pearl! I will give this pearl a setting worthy of it and entrust it to the care of the entire German Reich, the whole German nation. This city, too, will experience a new flowering.”
Adolf Hitler, on being welcomed by the Mayor of Vienna, Hermann Neubacher, on 9 April 1938.

Being confronted by an upbringing within a Nazi environment and a general silence regarding the influence of this political climate on the architectural and urban remodeling of Vienna at the time, the urban planner Klaus Steiner undertook the monumental task of seeking out and gathering information and materials regarding this subject, which had hitherto remained hidden or cleared away from the archives of a significantly unaddressed period of architectural history.

In 2011, he made the decision to hand over this overwhelming wealth of material to the Architekturzentrum Wien, which has resulted in its current exhibition, “Vienna, The Pearl of the Reich: Planning for Hitler”. Sifting and sorting through this rare and extensive collection, which includes original documents, photographs, and plans, the curators have organized the exhibition into a series of categories that illustrate the prominent themes that emerged from their task, and which reveal the role of architecture and urban planning as a tool for political instrumentation.

In a field that is normally restricted by legal, financial, and logistical factors, “uninhibited” political settings have created alluring potential scenarios for architects throughout history. Le Corbusier planned his “Contemporary City” to be built on a bulldozed section of Paris as a way of dealing with social inequality between the World Wars. The Romanian Parliament building, the largest and most expensive administrative building in the world was constructed during the Ceaușescu regime and called for the rash demolition of a large portion of central Bucharest.

As curator Monika Platzer points out regarding the period addressed in the exhibition, “For architects, this was a dream situation, as one could plan without any restrictions . . . every architect is eager to plan on [such] a tabula rasa.” Part of the “reshaping” plan for Vienna involved a complete reconstruction of Leopoldstadt, which presumed the fate of the district’s population, and which is chillingly indicated on a map where the entire area is blacked out for future reworking.

Fortunately for Vienna, the timing for these unconstrained “best laid plans” prevented their implementation for the most part. The onset of WWII established the limitations of the financial and material resources that would have been required to make Hitler’s vision for Vienna as “the Pearl of the Reich” a reality. But perhaps the most unsettling aspect revealed in the exhibition was not necessarily the unrealized grand fantasies, but rather the everyday realities that were systematically followed in the administrative sectors.

“The protagonists of the plans are made up of two levels: on the one hand, there was the city planning administration that was already situated in Vienna, on the other, the planners that were brought in from Germany,” explains curator Ingrid Holzschuh. Amid the numerous master blueprints, diagrams, and charts shown in the exhibition, what truly caught my eye was a modest, neatly typewritten, seemingly innocuous administrative document from the City Planning Department, which methodically listed the criteria that was followed for properly classifying Jewish descent. Grand visions aside, such objects that reveal the banality of the Third Reich bureaucracy are for me the true artifacts of this unspeakable period of history.

Short video about the exhibition